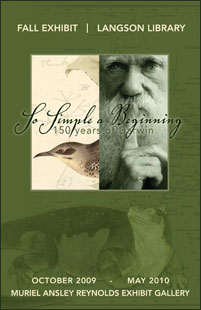 The Libraries’ fall exhibit, “So Simple a Beginning: 150 Years of Darwin” recognizes the 150th anniversary of the publication of Charles Darwin’s seminal work of scientific literature, On the Origin of Species, as well as the 200th year of his birth. The exhibit will be on view in the Langson Library until May 2010.

The exhibit traces the development and influence of Darwin’s theory of evolution and natural selection, starting with the Beagle expedition in 1831 and ending with the publication of On the Origin of the Species in 1859. It also describes the scientific and religious debate over Darwin’s findings, and its influence on art, literature, and business. The scope of the exhibit reaches today as his theories are present in our current vernacular with well known phrases, such as “Darwinian,” “survival of the fittest,” and “what separates us from the animals.” John Sisson, UCI Research Librarian for Biological Sciences is the curator.