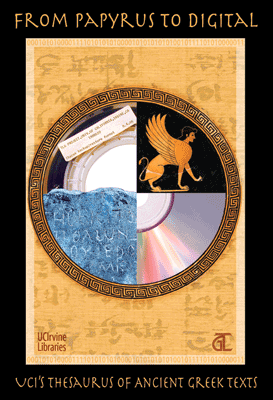 From Papyrus to Digital: UCI’s Thesaurus of Ancient Greek Texts

Since 1972 UCI has been home to the pioneering Thesaurus Linguae Graecae (TLG) Project, which seeks to create a comprehensive digital library of Greek literature from antiquity to the present era. In recognition of the project’s status as one of the first significant humanities projects in the world, the UCI Libraries have acquired the TLG archive to preserve for the benefit of future scholars.

From Papyrus to Digital: UCI’s Thesaurus of Ancient Greek Texts traced the transmission of the Greek text via an array of media – from fragile papyri and stone inscriptions, to codex manuscripts and printed books, and in recent years, digital media – that have been used to distribute and preserve Greek texts over the past 3000 years. It also addressed how the TLG undertook the monumental task of creating a comprehensive digital library of Greek texts at a time when the necessary technologies did not exist. The central roles played by initial donor Marianne McDonald, software designer David Packard, and founding director Theodore Brunner were highlighted. Items on display included rare books and a collection of artifacts illustrating the development of the TLG and its technologies.