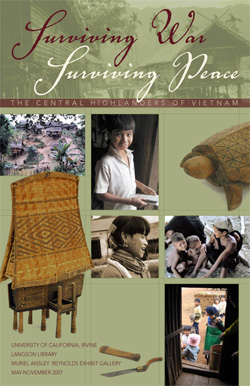 The Libraries’ spring exhibit highlights a collection of photographs of the ethnic Highlanders of Vietnam recently donated to the Southeast Asian Archive. The traditional culture of these ethnic groups came under threat during the Vietnam War and has been largely decimated in the years since due to forced relocation policies of the current government. Anthropologist Joseph Carrier, who spent time among the Highlanders (known in French as montagnards) while posted to Vietnam as a RAND Company researcher during the 1960s, shot the majority of the images and donated them in 2006 and 2007. Some were taken during the War era, others during a return trip in January 2007. Also on exhibit are Highlander artifacts loaned by our speakers.

The program featured a panel of experts who have lived and worked with Highlander groups: Dr. Carrier, who has a Ph.D. in Anthropology from UCI; linguist Jackie Maier; and Mike Little, a U.S. soldier posted to the highlands during the War. The panel was led by Charles Wheeler, Assistant Professor of History and an expert on Vietnam. During the evening we also honored Anne Frank, who will retire in June as Southeast Asian Archive Librarian after a distinguished forty-year career in the UCI Libraries.