Stage to Stage: The Theatrical Work of Robert Cohen 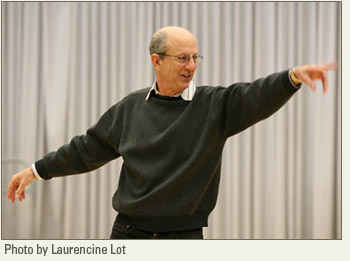 Stage to Stage: The Theatrical Work of Robert Cohen celebrates the accomplishments over more than forty years of UCI’s renowned stage director and distinguished professor of acting. Robert Cohen, currently Claire Trevor Professor of Drama, is one of UCI’s most notable founding faculty members. Since arriving in 1965, he has directed more than seventy productions on campus and thirty on the professional stage, published twelve books on acting and theater, written new plays and translated classic ones. In 1993 he was awarded the UCI Medal, the campus’s highest honor, and in 1999 he received the ATHA Career Achievement Award from the Association for Theatre in Higher Education.

Stage to Stage focuses on Professor Cohen’s productions at UCI. Beginning with Tennessee Williams’ Night of the Iguana in 1966, he has brought to life the timeless works of Shakespeare, Molière, Rodgers and Hammerstein, Bertolt Brecht, and many others. Beyond his directorial accomplishments, he is a passionate and renowned acting teacher whose legacy can be found on stages throughout the world.

Free and open to the public. Limited seating. Reservations requested, please call (949) 824-5300 or email: partners@uci.edu. Self parking ($7) in the Student Center parking structure on the corner of West Peltason and Pereira Dr. Please enter the structure on Pereira and obtain a parking permit at the information booth