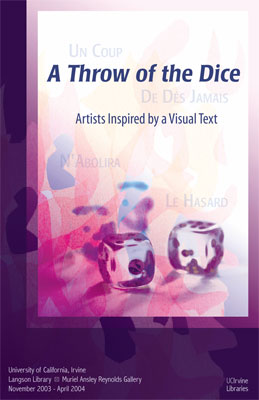 A Throw of the Dice: Artists Inspired By a Visual Text

Mallarmé is considered one of France’s greatest writers, and by sophisticated critics, the poet who comes closest to perfection. With publication of the experimental poem Un Coup de dés (translated as A Throw of the Dice) in 1897, he inaugurated a typography and page design capable of expressing movement in space and time. Un Coup de dés can be said to have led directly to the development of the 20th-century phenomenon known as the artists' book.

The exhibit examined the visual and textual interpretations of Mallarmé's poem that have been created from the 1960's to the present, and was curated by UCI Professors Emeriti Renée Riese Hubert and Judd Hubert, who have published extensively on both artists' books and Mallarmé. The opening event included a talk by Eric T. Haskell, Professor of French and Humanities, and Director of the Clark Humanities Museum, at Scripps College in Claremont. Haskell received his Ph.D. in French literature from UCI, where he studied under the Huberts.