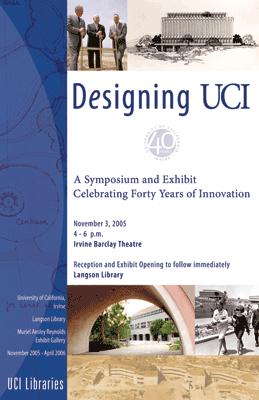 The Libraries' fall 2005 exhibit, Under Construction Indefinitely: Forty Years of Designing UCI, highlighted the planning and design of the UC Irvine campus and its architectural evolution over four decades. The exhibit showcased the development of UCI's built environment, beginning with architect and master planner William Pereira's initial concept for the campus, continuing through the explosive growth that continued in 2005.

UCI's buildings represent three major architectural styles of the 20th century: Brutalism, Postmodernism, and Contextualism. Each era is representative of the perspective of a particular UCI campus architect and the years during which he or she led the design of buildings on campus. Other notable architects whose works are represented at UCI include Frank Gehry, James Stirling, Robert Venturi, Charles Moore, and Robert Stern. The architectural diversity represented among UCI's academic schools and other units is revealed in the exhibit via photographs, building footprints, artists’ renderings, and a variety of publications that demonstrate the ways in which campus architectural and academic planning are intertwined.