Fall 2014 Exhibit
From Bean to Brew: Coffee and Culture 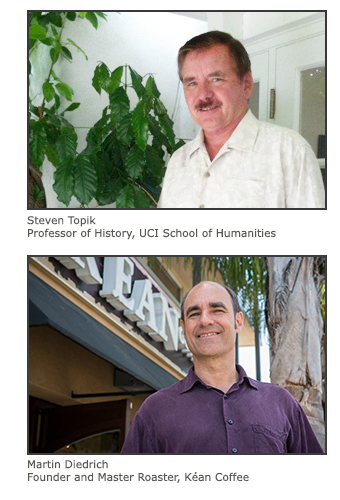 The Opening of our Fall Exhibit

From Bean to Brew: Coffee and Culture

Featuring a talk by

The UCI Libraries announce the opening of an exciting new exhibit called From Bean to Brew: Coffee and Culture, on Wednesday, November 12th at 5:30PM in Langson Library. Steven Topik, UCI Professor of History, and Martin Diedrich, Founder and Master Roaster of Kéan Coffee, are our opening night event speakers.

From Bean to Brew highlights the adoption of coffee as a widely consumed beverage and spans areas covering coffee production, the marketing of coffee, and the modern economics of coffee. The exhibit also showcases coffee culture in Orange County.

The exhibit shares some of the truths and legends surrounding the discovery of the coffee plant, how it was first ingested by humans, and its relationship with medicine and religion. It will go on to discuss the spread of coffee and its cultivation in Arabia, Europe, the Dutch colonies in Java, the French colonies in the West Indies, and onward to South America and Asia. The exhibit also explores coffeehouse culture in Orange County with local past and current coffeehouses like Diedrich’s and Kéan Coffee, and examines barista culture and the influence of the fair trade coffee movement. Finally, the exhibit brings to light the journey of the coffee berry from cultivation to your cup.

Opening night speakers Steven Topik, UCI Professor of History, and Martin Diedrich, Founder and Master Roaster of Kéan Coffee, will lead a fascinating conversation on coffee history and culture. Professor Steven Topik specializes in world history through the study of commodities, especially coffee. He has authored, co-authored, and edited several books including The Global Coffee Economy in Africa, Asia and Latin America, 1500-1989, and is currently working on a world history of coffee since 1500. Martin Diedrich founded Diedrich Coffee in Costa Mesa in 1983 and Kéan Coffee with his wife, Karen, in 2005. He is considered one of the pioneers of the coffeehouse phenomenon and is an internationally recognized coffee expert.

The program will be followed by a light reception and exhibit viewing. The event is free and open to the public. Space is limited; reservations are first come, first served. Please go to http://partners.lib.uci.edu/coffee to make an online reservation. For further information please call 949.824.4651 or email partners@uci.edu.

From Bean to Brew: Coffee and Culture will be on display through March 2015 in the Langson Library Muriel Ansley Reynolds Gallery during regular library hours.