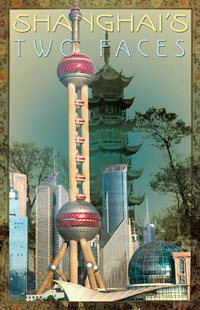 Through a visual display of UCI holdings in various formats, the exhibit will portray two key time frames in Shanghai’s history: as a free treaty port from the late 19th century to the early 20th century and as an open economic development zone from the late 20th century to the present. The exhibit will also highlight how local and global influences have shaped Shanghai’s successful evolution into the “Pearl of the East.”

The opening event featured a talk by UCI History Professor Jeffrey Wasserstrom, an expert on contemporary social, cultural and political issues relating to China, who has traveled to, taught, and written about the country for more than 20 years. Shanghai’s Two Faces was curated by Ying Zhang, Research Librarian for Asian Studies and a former college teacher in Shanghai.