Puttin' on the Glitz: Hollywood’s Influence on Fashion 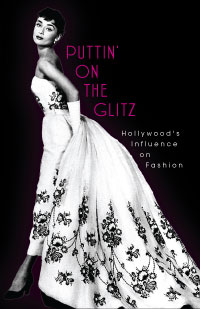 The Libraries fall exhibit, Putting on the Glitz: Hollywood’s Influence on Fashion, examines the major influence Hollywood had and continues to have over fashion.

In the early 1930s, European designers realized that a dramatic shift had occurred in the fashion industry. Paris was no longer the fashion capital of the world. With eighty-five million movie tickets being purchased each week, Hollywood had become a potent force, with the ability to reach almost all social classes and spread new fashions quickly. Movies had glamorous stars, huge budgets, and innovative designers all geared toward marketing and selling a trend.

The Libraries exciting new visual exhibit will highlight films and designers from Hollywood’s golden years through the 20th century, all presented within a historical context. The scope of the exhibit demonstrates how the entertainment industry dictates trends and ideologies and acts as a socializing force.  Items presented include books, magazines and newspaper articles, images, videos, and movie posters from the Libraries’ collections, and exciting costumes on display from UCI’s drama department.  Becky Imamoto, Research Librarian for History, is the curator.