Critical Theory at UCI Highlighted with Exhibit Opening and Conference 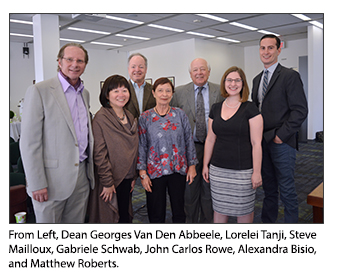 Exhibit
On Thursday evening, April 9th, 2015, Dr. Georges Van Den Abbeele, Dean of UCI's School of Humanities, served as the guest speaker at the opening reception for the exhibit. Dean Van Den Abbeele celebrated UCI's exemplary contribution to critical theory research and teaching, both in the United States and abroad.

"We recognize the value of this exhibit as part and parcel of the 50th anniversary of the founding of UC Irvine as an institution where critical theory has been key to the intellectual development and reputation of the campus," observed Dean Van Den Abbeele, "it might also be remarked that it is roughly the anniversary of the seminal Johns Hopkins conference on 'The Languages of Criticism and the Sciences of Man' better known by its published title, The Structuralist Controversy." 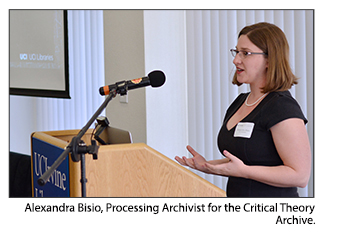 Dean Van Den Abbeele observed that, "The 50th anniversary of the Hopkins conference is thus linked to our own 50th anniversary of UCI's first graduating class, by the crucial role critical theory has played in supporting UCI's growth and international reputation."

Through Discerning Eyes: Origins and Impact of Critical Theory at UCI will be on display in the Langson Library's Muriel Ansley Reynolds Gallery through mid-September. An audio recording of the opening night presentation is available. Photos from the exhibit opening can be viewed on the UCI Libraries Flickr. 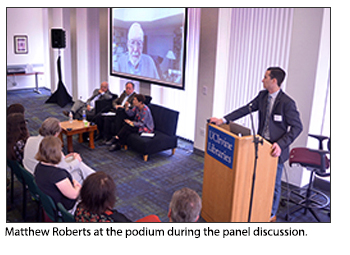 Photos from the Critical Theory Conference can be viewed on the UCI Libraries Flickr.